Are speed limiters for trucks coming? 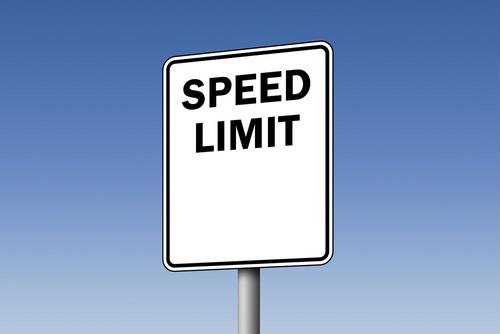 The rules of the road determine how fast motorists are allowed to operate their vehicles. On most major highways, speed limits range between a low of 55 miles per hour to highs of 75 and 80 mph.

The people behind the wheel — both everyday drivers and those who do it for a living— are entrusted with the responsibility to drive safely always and to avoid exceeding the posted limit. But if the Federal Motor Carrier Safety Administration has anything to say about it, most heavy duty vehicles may have speed governors installed in them, preventing drivers from accelerating beyond a certain threshold.

On April 28, the FMCSA issued a notice of intent (NOI) to the Federal Register regarding speed limiting technology, leveraging these systems so that they're installed in all newly assembled commercial vehicles. As Transport Topics points out, this isn't the first time that the FMCSA has kicked the tires on this matter, doing so in 2016 in partnership with other key interest groups. This time, however, it's going it alone.

While the notice of intent doesn't ensure that speed limiters are an inevitability, it does suggest that the FMCSA is pursuing data-backed evidence and research that would support why the technology is worth using. Publishing the NOI in the Federal Register also enables the public — as well as trade groups — to comment on the proposal as to whether it would be a good or bad idea.

ATA would support a speed limit maximum of 70 mph
Thus far, opinions have been decidedly mixed — with some for it, opposed to it or somewhere in the middle. Chris Spear, president of the American Trucking Association, said he's glad this issue is being discussed.

"ATA is pleased that the Federal Motor Carrier Safety Administration is pursuing a constructive, data-driven approach to the issue of truck speed limiters in its latest proposal," Spear explained in a press release. "We intend to thoroughly review FMCSA's proposal, and we look forward to working with the agency to shape a final rule that is consistent with our policy supporting the use of speed limiters in conjunction with numerous other safety technologies."

As the ATA says on its website, its position on this matter has been the same for as long as it's been a subject of discussion. While it is opposed to governors that would prevent truckers from going any faster than 60 mph, it supports a maximum of 70 mph, so long as they're in trucks where adaptive cruise control and automatic braking systems are standard inclusions of the commercial vehicles.

The Owner Operator Independent Drivers Association, on the other hand, is against the idea. OOIDA President Todd Spencer warned it could do the opposite of what's intended by increasing the risk of accidents by creating even more congestion than already exists. He also pointed out that many trucks are already incapable of going faster than the speeds that light vehicles can travel at.

The public has 30 days from April 28 to comment on the NOI. What happens from there is for the FMCSA to decide.