6 tips for truckers to stay safe during tornado season 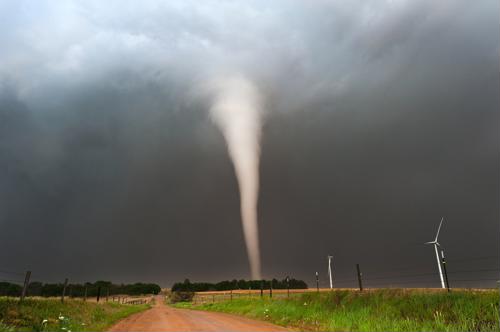 In many parts of the country, it's still high time for tornadoes and likely will be for at least another month, as weather conditions in the Midwest in particular continue to be conducive to these dangerous funnel clouds. With that in mind, it's critical for everyone to know the best practices for getting to safety and otherwise avoiding the damaging effects of such a storm.

That's particularly true for truckers, who may often find themselves confronted with a twister on open roads, miles from a safe structure. The following tips should help you stay safe no matter when or where you run into these conditions:

First and foremost, it's a good idea to understand what kinds of conditions lead to tornadoes and react appropriately - hopefully before the funnel even forms, according to PAM Transport. If you see the sky darken, suddenly encounter heavy rains or hail, and see a large wall of clouds moving quickly across the sky, those are all good indications that a tornado is coming soon.

2) Get off the road if you can

As a general rule, it's a bad idea to be out in the open when a tornado is on the way, and you should make all efforts you can to find a safe spot to park your truck, PAM Transport advised. Along similar lines, it's smart to get out of your truck if it's feasible, and move into a well-constructed safe building or underground shelter.

3) Try to move to lower ground

If you find that you're not particularly close to a building where you believe you can weather a storm safely, moving to lower ground is the best alternative, according to Trucker to Trucker. Something as simple as getting into a ditch next to a highway will help you avoid being battered by debris and get you out of the harshest winds.

4) Drive away from the funnel

If you notice the tornado seems to be a long way away from you, it's usually advisable to drive away from it rather than letting it come to you, Trucker to Trucker said. If it's hard to tell the direction the funnel is moving in, experts generally recommend driving at a right angle from where it is in relation to you. Such a weather system just isn't going to make that kind of hard turn to match you.

There is a popular urban myth that it's safe to get under an overpass during a tornado but that's just not the case, according to Truckers News. In fact, the winds in such a place can actually be stronger, and depending on the direction the storm is moving, there can be more debris whipping around in there.

6) Understand the difference between a "watch" and a "warning"

You may receive alerts on your phone that there is a tornado watch or warning in effect, and these are two different situations, Truckers News added. A watch is merely letting you know that conditions are ripe for a tornado. A warning means one is imminent or has already been spotted.