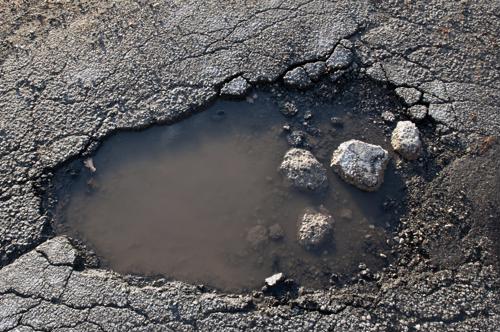 There are few leaders in America - private or public - who don't have a vested interest in maintaining state and federal infrastructure. When roads and bridges are in good repair, the economy runs much more smoothly, but in recent years, funding for such upkeep has slipped, leading to more roads being in rough shape.

From 2009 to 2017 - the most recent year for which complete data is available - the number of roads across the U.S. considered to be in poor condition increased from 14% to 20%, according to new research from Transportation for America and Taxpayers for Common Sense. Part of the problem is states are spending nearly as much money to add roads ($21.3 billion) as to maintain existing ones ($21.4 billion), and every lane-mile of new road costs about $24,000 per year to maintain.

The problem? In that nine-year period, the U.S. added nearly 223,500 lane-miles (e.g. a four-lane road one mile long counts as four lane-miles), adding billions of dollars in costs that don't really address the problem. In failing to do so, they allow damage to vehicles to pile up, costing drivers billions of dollars nationwide each year.

Of course, this is a big issue for truckers in particular, as they often log tens of thousands of miles per year. Here are four steps they can take to make sure their big rigs stay in good shape on poorly maintained roads:

1) Maintain a safe distance when you start to notice potholes

Potholes and other road damage are a good sign that you're about to encounter some bumpy pavement, and it's necessary to make sure you're a safe distance away from any vehicles when that happens, according to Allstate. That's because if you blow out a tire on a pothole or otherwise find it more difficult to drive as a result, you're at much higher risk of losing control.

This is good practice for any driver - whether piloting a compact car or an 18-wheeler - but when going over rough roads, it's doubly important to have properly inflated tires, Allstate added. If you go over a pothole on an under-inflated tire, you're far more likely to blow it out.

As with just about any other safety issue for truckers, one of the best ways to avoid the major issues that arise from potholes is just ease off the gas a bit, according to the American Trucking Association. Doing so gives you more time to avoid the potholes you see, and slowly pass over the ones you can't avoid, reducing the wear and tear on your tires, wheels, axles and so forth.

4) Report what you find

While rough roads may be a fact of life for truckers, it's important to let the proper authorities know about the issue, as well as dispatchers and fellow truckers, the ATA cautioned. Fortunately, many state or municipal governments have channels to report potholes - hotlines, websites, etc. - and will help get the problem fixed for the next pro hauler who has to traverse that road.