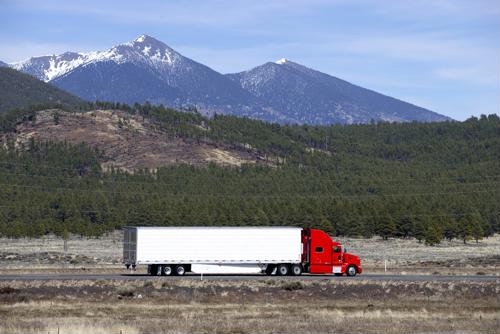 A trucker's work is seemingly never done. As soon as one run ends, another begins a few days later at most. Given that the job typically involves driving hundreds or even thousands of miles at a stretch, that's a lot of rubber meeting the road. Over the years, experienced truckers can expect to pass some pretty big milestones, but few will likely ever drive as many miles as a man who was apparently destined for the profession: Larry Miles.

Given the appropriate surname, Miles was recently honored by his Oklahoma-based employer for surpassing the stunning milestone of 10 million miles driven, according to CDL Life. That's the equivalent of driving around the world at the equator more than 400 times - and he's never had a single incident or accident to report. Last year, Miles was also recognized as the Oklahoma Driver of the Year by the Oklahoma Trucking Association.

When the milestone was unveiled on Facebook, some truckers expressed borderline incredulity at the accomplishment, the report said. One noted it would require one to drive an average of 500 miles per day for more than 20,000 days - or 55 years.

Lofty company
Despite the amazing feat, Larry Miles is hardly the first trucker to be recognized for reaching an impressive high-water mark for the amount of road he's covered, according to Jackson, Mississippi, television station WLBT. In 2019, trucker Barry Queebodeaux was honored for surpassing 9 million miles, all part of a 34-year career that, like Miles, has gone without a single accident. That's a rare accomplishment, given that there are about 500,000 accidents involving truckers each year.

Queebodeaux credits that success to a combination of extreme vigilance and careful driving, as well as his employer doing all it can to properly maintain the many vehicles he's driven over the years, ensuring that everything works properly and sets truckers up for success, the report said.

What does it take?
Many truckers already drive hundreds of miles per day, and thus well into the thousands each week, but 1 million miles will take years to accomplish even with such a grueling schedule, according to Transport America. One driver with more than 10 years of experience behind the wheel who recently passed the million-mile mark told the site that it takes a real "love of the game" to have that kind of dedication, as well as a strong support system that makes the many days away from home more tolerable.

"This is a craft," million-mile trucker Farid Salem told the site. "I'm aware that at any time, something could happen. Especially when you least expect it. For example, when you're within a few miles of your destination - that's when a lot of drivers let down their guard."

It's estimated that only about 1 in 20 drivers will be able to reach 1 million miles safely, and far fewer than that will ever clear 2 million, the report said.

For that reason, freight companies need to be conscientious about making sure they hire dedicated, careful drivers - and compensate the successful ones well enough to keep them on the road for many miles to come.