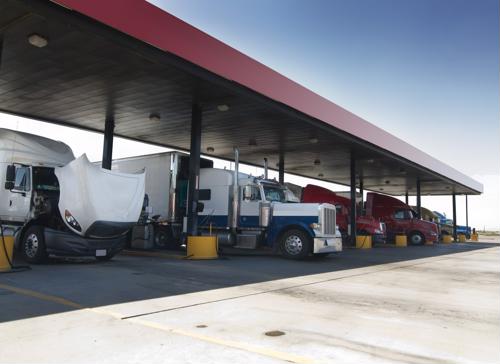 There are many reasons professional truck drivers should want to improve their fuel economy, including reducing costs, increasing time spent on the road and cutting down on pollution. Even if truckers don't have to pay for diesel out of their own pockets, fuel economy should still be something they try to maximize on every trip they take.

The following tips will help you do just that, and help you get the job done just a little more efficiently every day:

You know how much you're hauling when you've got a full trailer, so it should come as no surprise that your truck has to work extra hard to get up to a good cruising speed, according to Arrow Truck Sales. For that reason, every time you hit the brakes, you're costing yourself momentum and making your truck work harder when you step on the gas again. Instead, try coasting in situations where hitting the brakes isn't immediately necessary.

2) Ease off the gas pedal

As mentioned, it takes a lot more fuel to get up to a good speed than to maintain it, Arrow Truck Sales said. With that in mind, if you tend to drive, say, 75 miles per hour, you're spending more fuel not only getting to that point, but also to maintain that speed. Instead, reducing your typical cruising speed by even 5 miles per hour will actually save you a lot of fuel.

Along similar lines to not braking as often or reducing your average speed, avoid aggressive driving tactics like braking or accelerating hard, according to Trucking Info. Obviously, that's a good idea from a safety standpoint, but it's also going to help with your fuel economy. Taking it just a little bit easier on the road will go a long way on a number of fronts.

4) Keep an eye on the tire pressure

When your tires start to run flat, they make more contact with the pavement, increasing drag and costing you fuel efficiency, Trucking Info advised. For that reason, you should always seek to make sure all your tires are inflated to the level recommended by manufacturers. As an added bonus, that will also help you avoid those dreaded blowouts every trucker hates to experience.

Given that even the sleekest of tractor trailers is going to be boxy, the effect of wind resistance is something you need to think about as it relates to fuel economy, according to RTS. For instance, reducing the gap between the cab and the trailer itself to 18 inches or less can cut down the amount of drag you face as you travel the nation's highways and byways. You might also want to make the investment in side skirts and "boat tails" that reduce drag beneath and behind the trailer. While those obviously require a potentially significant expense up front, you can crunch the numbers based on how much you drive to see how quickly you would recoup that investment.