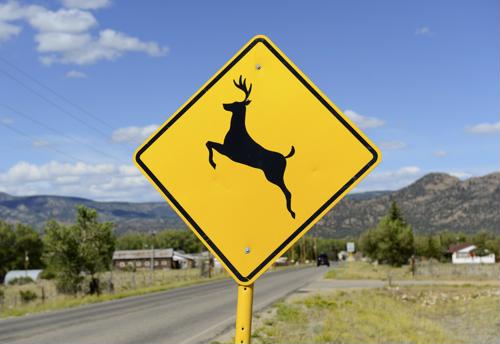 Truckers likely know full well the potential problems that wildlife can pose to their vehicles as they traverse the highways and byways in any part of the country. However, these risks tend to increase in fall for a number of regions, so drivers must use caution at this time of year about the problems associated with encountering wildlife in the road.

The following tips will help you avoid such a collision and keep on rolling throughout the fall and into winter:

While people tend to think of animals as either active during the day or night, many animals that end up causing accidents on the road are crepuscular, meaning active at dawn and dusk, according to Fleet Clean. That's a problem for truckers because these are also the times of day when the sun's rays will most likely be shining directly in their eyes, depending on the direction they're driving.

Crepuscular animals include things like deer, bears, skunks, and so on. As such, this is the part of the day when you need to be most alert for animals coming into the road.

While animals probably won't try to cross busy five-lane highways, when you're on a stretch where there aren't many other vehicles, animals are more likely to try to cross, Fleet Clean cautioned. As such, when you're on a two-lane stretch without much other traffic - especially those bordered by woods or bodies of water - you should be extra-cautious of animals coming into the roadway.

These animals, like deer, tend to travel in larger groups than others, according to the Farmers' Almanac. As a general rule, you should always assume that if you see one deer, more are nearby. In other words, even if one doesn't try to cross a highway, another you haven't seen yet may be a bit farther up the road. Consequently, it's a good idea to ease off the gas pedal as soon as you see an animal.

As mentioned, fall is a time when many animals are more active, but even within the fall, there are peaks and valleys, the Farmers' Almanac added. For instance, October in particular is brings with it a lot more activity, but breeding season for deer can last into early January in some parts of the country, so you may need to stay aware of the risk for the next few months.

Animal-related hazards are so common on some stretches of the highway that there are warning signs letting you know, for example, that moose are more common over the next 10 miles, according to Wex. You should always keep an eye out for these alerts, but that's especially true at this time of year. When you see them, it's vital to slow down and be a little more careful in scanning the roadsides for any animals that may attempt to enter the roadway.