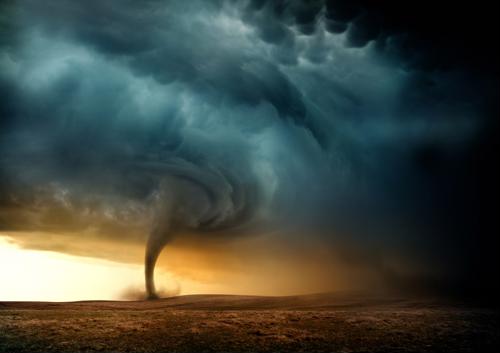 So far in 2019, the tornado season has been rather active, and it's still ongoing, with devastating storms touching down across the Midwest. With that in mind, truckers need to know what to do when their routes are threatened by a tornado, as a means of keeping themselves and their big rigs as safe as possible.

Here are six tips that should help drivers avoid the massive risks that come with being in a tornado's path:

1) Stay in the driver's seat and get low

One of the most common misconceptions about tornado safety is that people should get out of their vehicles and shelter on the roadside, according to Trucker to Trucker. Experts say this is quite dangerous because it increases your chances of being hit with debris. Unless you can easily get into a nearby building, you shouldn't risk it. Instead, look for a nearby ditch or other space that's below ground level, and try to get your truck into it.

After that, it's a good idea to buckle in and put your head between your knees so nothing can hit you flying through the window.

2) Drive the other way

When you spot a tornado, the first thing you should do is try to get away from it until you find somewhere safe, Trucker to Trucker added. However, this doesn't mean you should simply try to outrun the storm. Instead, drive in the opposite direction and take cover when you find an area suitable for protecting yourself.

Another common misconception is drivers should stop under overpasses or in tunnels, but this isn't a good idea, according to Freightwaves. The high winds whipping through these spaces can actually be more dangerous than being out in the open. But along similar lines, it's also a bad idea to park near buildings or other structures that might be prone to collapse, as they could fall on you or your truck.

There may be many ways to identify tornado risk before it actually becomes a dangerous situation, and obviously the easiest way to do it is to listen to the radio for tornado warnings when skies darken, Freightwaves cautioned. If you notice suddenly shifting winds, heavy rain, loud sustained rumbling that sounds like thunder, or hail, you're likely in a potential tornado's path.

5) Have emergency supplies on hand

It's a good idea for truckers to have items like a first-aid kit and some extra food and water in their vehicles anyway, but those driving through Tornado Alley at this time of year need to be extra-diligent, according to The Truckers Report. Having food and water, a flashlight, a battery-powered radio and so on is a must in these situations.

6) Know what to do if you're not in your truck

Of course, some tornados may hit when truckers are gassing up, getting dinner or unloading their trailers, The Truckers Report said. In these cases, it's best to try to shelter in the nearest building or, if you can't get back to your truck safely, find the nearest ditch to lie in with your head covered.