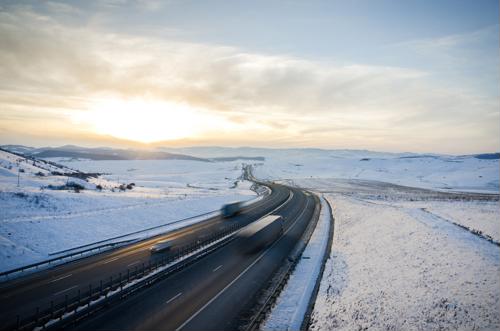 Whipping winds, heavy snows, icy conditions and sub-zero temperatures have become more common in recent weeks, increasing the risk of crashes for drivers of all types. Of course, truckers are more experienced driving in these harsh conditions than just about anyone else, but they also have more at stake. With that in mind, there are plenty of things pro haulers should do to make sure they're keeping themselves and other motorists safe on the roads.

Perhaps the best way to keep everyone on the roads safe is to be far more careful about maintaining critical vehicle components, according to American Trucker. That means drivers need to inspect their trucks carefully on a more regular basis, examining the brakes, batteries, fluid levels, headlights, wiper blades and - especially - tires.

They also need to remember the importance of keeping their vehicles running so that their exhaust pipes don't freeze, the report said. Diesel exhaust fluid begins to freeze at the same temperature as water, but as long as the engine is running, the exhaust will continue to work as intended.

When bad weather hits
Of course, much of these preparation exercises are done in an attempt to make sure everyone is safe when heavy snows and other adverse conditions descend on a region. Unfortunately for truckers, conditions on the highways and byways sometimes get so bad thanks to nasty winter weather that commercial vehicles are banned from operating on them until the situation improves.

That recently happened in Pennsylvania, where state troopers were out in force to prevent pro haulers from violating the travel ban, according to Scranton television station WNEP. Statewide, drivers were hit with nearly 830 citations for driving during a commercial vehicle travel ban, but freight companies have complained that the ban itself was "unnecessary and overcautious." While similar efforts in the past were hailed by industry businesses, critics say the most recent storm didn't pass muster.

"Safety always comes first, and we wouldn't put our employees in harm's way," P.J. Dempsey, the president of Dempsey Uniform and Linen, told the station. "Winter weather is part of living here. I don't think we expected two or three inches of snow - even if there's some sleet or freezing rain - to shut down the highways for anybody, never mind just trucks."

Keeping safety in mind
Even when travel bans aren't in place, professional drivers need to be aware of road conditions and act accordingly, according to Omaha television station KMTV. Long-time drivers say that when there's even a hint of slick roads, it's time for truckers to slow down. This may be especially true if other motorists on the road seem to continue to drive recklessly.

Usually, truckers will have a pretty good idea of how to operate their vehicles safely, drawing on years or even decades of experience driving millions of miles. However, a good rule of thumb here is to pull over in a safe area whenever there's doubt about the overall safety of road conditions.